My poor belly.  I started stimming on Saturday, which brings me up to 3 injections per night.  I'm finally getting a lovely pattern of bruises around my bellybutton.  So far, I'm not feeling too much going on in my ovaries, which has me a bit nervous.  My second ultrasound is tomorrow morning, so hopefully it will reveal that my ovaries are doing more than I can feel.  For those of you who have done injectables for IUI and also done IVF, was the rate of follicle growth the same?  I'm wondering if my follicles are just growing more slowly with the IVF drugs, and maybe that's why I can't feel much.
And for anyone who wants to compare notes, here's my IVF schedule:
8/31- 9/14-  birth control
9/15- 9/19- birth control + 20 units lupr0n
9/20 - 9/25 - 20 units lupr0n
9/26- 10/01  - 5 units lupr0n, 15 units low dose HCG, 300 units f0llustim
10/02- 2 shots of 0vidrel
10/4 - retrieval
Posted by Gayby Rabies at 9:56 PM 9 comments:

One year anniversary of the break-up.

It has been one year since we parted ways and I must admit, I still miss you terribly. I'm sure you were hurt and confused by the break-up. First I start seeing less and less of you, and then I stop returning your calls entirely. Believe me when I say it's not you it's me. You were my reason for getting up in the morning. You made me feel alive. At times I'll catch a whiff of your perfume on the air and I'll feel nostalgic for the old days, when we were inseparable. When I was having a tough day, you could comfort me like no one else could.
Sometimes I think we can still be friends. Maybe see each other on occasion. But I have to be honest with myself. I know that if I start seeing you a little bit, I'll want you all the time. I have no control when it comes to you. So for now we must remain apart, even though there are some days when I think it will kill me. But I won't ever give up on the hope of us being together again...someday.
*sigh*
Posted by Gayby Rabies at 4:40 PM 10 comments:

This IVF stuff is really happening. I've been on birth control for a few weeks, and started lupr0n tonight. So here is the obligatory photo of my giant stash of meds. And this doesn't even include the needles. 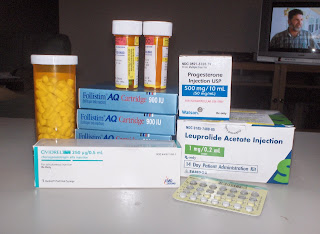 Here is a picture of the needle for pr0gesterone next to a f0llustim needle just for comparison purposes: And here's a picture of the pr0gesterone needle next to a railroad spike, again just for comparison purposes: 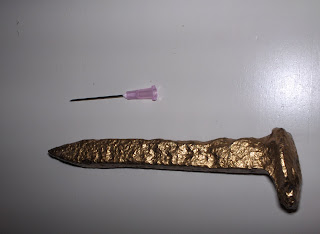 hint: the railroad spike is painted gold
(edit- okay all of you gutterminds, as soon as I posted this picture I realized that the railroad spike looks like a lumpy gold dildo. Why do I have a railroad spike you ask? Elizabeth's father has occasionally found the spikes when he is out walking the dog. He thinks they are very cool. Many years ago, on the first Christmas I spent with Elizabeth, her father kept sneaking off to the basement and returning with a silly grin on his face. Every time he opened the door, we could smell paint fumes. He wouldn't say a word about what he was up to. On Christmas morning, I got a small, clumsily wrapped package from Elizabeth's father with a card that said "You're as good as gold". Inside was a railroad spike that he had found the day before and painted gold. He has only found about 8 of the railroad spikes in his life, and given only a few away. So in his quirky dad kind of way, the railroad spike was his way of letting me know that I was totally accepted into the family. It's a little silly, but very sweet if you know the guy.)
The doctor decided to put me on metf0rmin even though I tested negative for insulin resistance because it supposedly helps egg quality. I'm willing to try anything at this point. Has anyone out there used metf0rmin? Did you have any side effects? The nurse told me to do a low-carb / high protein diet to minimize the side effects of metf0rmin. The low carb thing is no fun, so I might stop doing it and see how it goes. What about lupr0n? So far, I'm feeling okay but perhaps the side effects take a little while to manifest themselves. Anyone care to share their experience in the wonderful world of IVF drugs?
Posted by Gayby Rabies at 10:54 PM 13 comments:

You know how it is when you have an inside joke? When you see something that is only funny to you and others who are in on the joke, and you smirk or giggle like an idiot? Well, TTC has become the inside joke between me and Elizabeth. The other day we were watching T0p Chef with some friends, and one of the chefs was making something with liquid nitrogen. My friend Leigh suggested that for the next episode, I make snacks for everyone using liquid nitrogen. The mere mention of liquid nitrogen causes Elizabeth to get a goofy grin on her face. "Where would we EVER get something like THAT?" she wondered aloud. Of course I know she's probably thinking about the time we threw a strawberry into the tank after a home insem just because we were curious. But normal people don't giggle when they see liquid nitrogen, so I played it cool as best I could.

Last week Elizabeth's parent's were visiting and her mother commented on a little hand painted bowl sitting on the counter. She picked it up to admire it further and complimented our good taste. Little did she know that this is the bowl that we used for all of our home insems. The bowl would be placed on the bedside table to hold the thawing vials so they wouldn't fall and roll under the bed or radiator. I thanked her, but with a stupid grin on my face. And then I caught Elizabeth's eye and nearly died trying to stop myself from laughing. It is not normal to laugh or avoid eye contact when someone compliments your kitchenware.

I am so terrible at hiding my emotions and keeping secrets. Why did I think I would be able to get myself knocked up without anyone finding out until I announced my pregnancy?
Posted by Gayby Rabies at 1:50 PM 8 comments:

Yesterday, I went for my day 3 bloodwork and was given the go-ahead to start birth control.  I was very disappointed to discover that they do not taste like pez.  My nurse sent me a preliminary IVF schedule this morning.  This is really happening, folks.  The first few weeks of the schedule are easy enough to follow.  It's the last week or two when things will be a bit up in the air depending on how I respond to the f.ollustim.  As soon as I get a bunch of follicles at 16mm I trigger and then have the retrieval 36 hours later.  The clinic usually does a 5 day transfer, but will go earlier if the embryos don't look very strong.  Normally, I'd be okay to go with the flow, but there's supposed to be a family get together during the week in question.
My mother has been with a really great guy named Roger for close to 4 years now, and they've been living together for a little over 2.  They're almost painfully cute together.  He has a son and daughter, both a little younger than Elizabeth and I.  Last October, my mother and Roger arranged a weekend at the beach for all of the children and their significant others to meet.  It was a great idea, but the timing was hard.  I had just gotten my first BFN in September.  I ended up missing what should have been my second try to be at the beach.  To make matters worse, Roger's daughter was there with her adorable 2 year old son, and she was visibly pregnant with her second.  I was moping and feeling sorry for myself for the first BFN, and then had to watch my mother adoring her first grandchild, and doting on her pregnant stepdaughter.  I'm not very good at hiding my emotions, so I know my mother picked up on my grumpiness.  Unfortunately, she had no idea why I was in a foul mood, because Elizabeth and I have not told anyone we're TTC.  So my mother probably though I was being antisocial for no reason, or that I was unwilling to accept new family members.
Now, my mother is planning a repeat of the beach getaway for this October.  And it's almost certain that I'll need to be at the clinic that weekend, either for monitoring or retrieval.  There's a very slight chance that the schedule will work out so that I can trigger on a Saturday morning, spend one day at the beach, and then race back to the clinic for the retrieval.  But it's highly unlikely that it will work out so easily.  No, I think the most likely scenario is that I pretend to  suddenly come down with swine flu just before the beach weekend and have to back out.  Yeah, I'm concerned that my mother might suspect that I'm faking the flu and get upset.  I know this weekend means a lot to her, so I feel really guilty about the possibility of backing out at the last minute.  I can only hope she understands, and forgives me once I finally get pregnant.
Posted by Gayby Rabies at 8:15 PM 5 comments: