I like food. I like cooking food, eating food, watching TV shows about food, even looking at pictures of food online. Before my kids were born, I decided that I would do whatever I had to do to ensure that they'd be good eaters. I think we're doing a halfway decent job so far. We always eat dinner as a family, even though that means that the meal is a bit more frenzied, and served a bit earlier than the adults would like. The kiddos are fairly adventurous, and will at least taste anything we put in front of them.
I searched high and low looking for the right food containers to send to daycare. I wanted something that was leakproof. I wanted something microwave safe. I wanted compartments, but I wanted the option that some of the compartments could be kept cold and others could be heated. We've been using this, and so far been really happy with it. I do my best to make sure to pack a variety of different things. The daycare teachers report that the kids love to eat.

But then they moved to the toddler room. And the daycare provides food for kids in the toddler room and up. Some parents still pack lunches, but I think most happily let their kids eat what is provided. From what I can see, the meals are a rotation of hot dogs, pizza, grilled cheese, chicken nuggets, ziti, and mac and cheese (no joke, just 6 items). The sides are canned fruit, and canned veggies topped with a healthy dose of country crock. Not exactly the quality or variety I want my kids eating every day. So I've continued to pack lunches. But their end of the day reports show that the kids have been getting daycare food too. Nobody even asked me if it was okay to give to them.

For a few days, I struggled over how to address this. It appears that most of the kids there eat the daycare food. I didn't want to be know as the bitch who thinks her kids are too good for the food that is perfectly fine for all the other kids. The head teacher, who I needed to talk to about the issue was out for a few days, so that bought my chickenshit ass as little more time. Besides, how much damage could a little grilled cheese do. But then it happened. Somebody gave my kids chicken nuggets. Chicken nuggets scare me. It pushed me to stop being a wimp, and I talked to someone immediately. Though of course, I couldn't bring myself to say that I thought the food they served was poor quality and I didn't want my kids to have it. I just asked if there was a problem with the food I was sending, or if I wasn't sending enough. It turns out that, being typical toddlers, my kids just want what all the other kids have if their own lunch isn't one of their favorites. Apparently, they cry, whine, point and beg when they see that other kids are eating something different.

I'm at a bit of a loss on what to do. I don't want my kids to be hungry, and I know that there is not enough staff at the daycare to sit with them for however long it takes to decide they're willing to eat what I've packed. And it's impossible to force feed a toddler. They can't be separated from the other kids at mealtimes. Because I was in a hurry to get to work, the only thing I could think to say at the time was that I didn't want them getting any meat. I figure that's the worst of the stuff they'd be getting there. At the moment, I think my best option for dealing with the other stuff is to pack the tried and true stuff they love for their lunches, in the hopes that it distracts them from the other stuff. I've been wrestling with the way I've handled the situation all day, wondering if I made the right choice. I can't decide if it's better for them to eat something that's not what I would chose to serve, or be hungry. Am I being a food snob by saying I don't want them eating daycare food, or am I being irresponsible for not stopping it immediately? In the meantime, if anyone has any toddler friendly recipes they'd like to share, I'm all ears!
Posted by Gayby Rabies at 3:14 PM 11 comments:

So I suppose it's time for my monthly blog post. Speaking of monthly, I just got my first postpartum period. I was not looking forward to that. I had hoped that breastfeeding would have kept it away longer, but I've been pumping a lot less, so maybe that's to blame.
On the fun side of things, the kids have moved up to the next room at daycare. The first room, the infant room, is for babies age 6 weeks to 18 months. Our kids were the oldest in there, and were obviously getting really bored. The room is filled with swings and bouncers, definitely geared more toward the younger children in the room. Now they're in a room with activities and things to climb on (things that they're actually supposed to be climbing on) and kids who are communicating verbally. I don't think they got talked to very much in the infant room. I'm hoping that being in a room full of talkers helps with their language skills. They've only got around 20 or 30 words at last count, and their pronunciation is not so great. I think my love and I are the only ones who can understand what they are saying most of the time. In the short time that they've been in the toddler room, they're already starting to make more efforts with talking and their pronunciation is getting clearer.
I know everyone says this about every age, but this really is a fun age. Challenging, but fun. They are so sweet to each other. If one is crying, the other will bring a stuffed animal or sippy cup, or anything they think will help. Melts my heart every time. It is definitely on of the best things about having twins.

Our little Bean is the helper, and the comedian. She loves putting things away, and I think the toybox itself may be her favorite toy. The other day we had a little coffee pot mishap, which sent coffee grounds flying. Before I could get the dustbuster out to clean up the mess, baby girl had grabbed a tissue and started wiping the floor. She loves to attempt to dress herself. Sometimes, it's all part of her comedy routine. Like when she puts a pair of pants on her head and parades around the room. She knows she's being silly, and will pause what she's doing to be sure she has an audience. She loves to make people laugh. The other day, her trick was pretending to sleep at the lunch table.

Her brother on the other hand is more likely to be climbing on the lunch table. He is an active, active boy. In one quick movement, he can effortlessly climb onto a dining room chair. He climbs everything. He also has a thing for brooms / vacuums / mops and swiffers. He's got some kind of broom radar, and will make a beeline for the thing any time he enters a room where a floor cleaning implement is present. A broom can keep him entertained for minutes on end. He also loves books. If you make the mistake of sitting on the floor, there's a good chance he'll plop onto your lap with a book. And you will have to read that book at least 3 times. He's also very sensitive, and very very affectionate. Sometimes he'll just drop what he's doing in order to give you a big hug and kiss. He loves to pet and hug his very patient dogs.

I know I'm biased, but I think these kids are awesome. 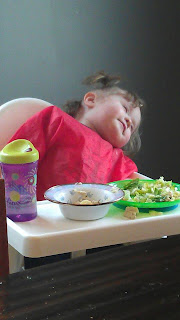 pretending to sleep at the table. an ingenious way to get out of an awkward conversation. if you look closely, you can see she's smiling at her own cleverness. 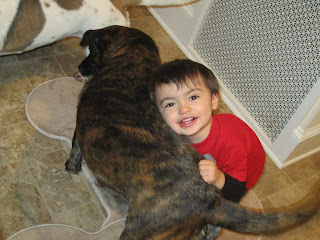 this dog puts up with so much