Some of you were caught by surprise when you got your craft exchange presents in the mail. Not me. I was like a little kid waiting for my package with a mysterious return address to show up. The suspense of waiting to find out who got me was so exciting. I even printed out the list of participants, and as each craft was posted on a blog, I would cross the crafter's name off my list. I didn't get to far in my sleuthing, because the package arrived yesterday! And just like my pregnancy, this package was a twofer. The first item I unwrapped was this cute unbreakable, safe for the lower branches tree: 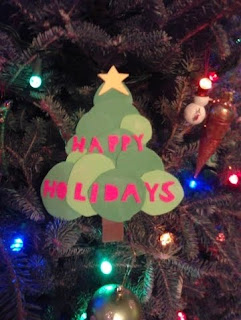 Next, there was the little box. A present within a present! Could this get any cooler? 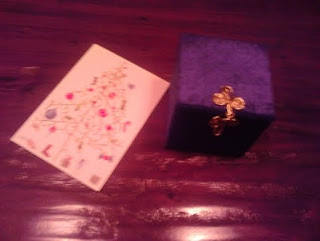 And what was inside the box, you ask? Upon first glance, it looks like it's just a cute handpainted glass ball with snowmen. 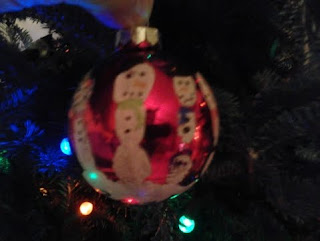 Turn the ball over just a little, and you can see that the snowmen are actually fingers on an adorable little baby hand. so. friggin. cute. 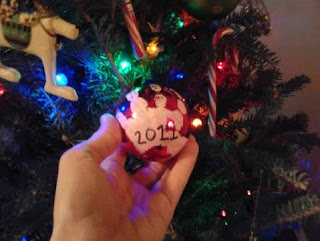 Last of all, there was a card. I saved that for last because finding out who had sent the package was the most exciting part. I am such a cotton headed ninnymuggins that I forgot to get a card for my own craft, and had to jot a quick message on a paper that I stole from the photocopier as I ran to the post office on my lunch break.
So who is the awesome blogger who sent this marvelous, well thought out package? It was the lovely ladies at Build-A-Baby (or two) and their kiddos. I'm so happy that the craft exchange has led me to this new blog, and it's another blog with boy/girl twins to boot! Thanks Build-A-Baby family for the beautiful gifts. So sorry my crummy cell phone pics don't do them justice.
Posted by Gayby Rabies at 11:49 AM 4 comments:

Playing catchup on this 12 days of Christmas thing...

Two turtle doves
It took me until I was about 10 years old to really figure out my mother's side of the family. Let's see if you can follow. My grandfather married E, and they had my mother and 2 aunts. They got divorced, and he married T, who had 2 boys from a previous marriage. T's ex-husband died when the boys were young. T died of cancer when I was almost 2, and a few years later my grandfather married B, who has 2 sons and 1 daughter. T's son's remained close to my grandfather, and grew close to his new wife because they really had no other family. So that makes 3 aunts, four uncles, plus their spouses and children who I'd see every year at Christmas. My grandfather also had a lot of family friends, some of whom I thought were actual relatives for a long time. He was the ultimate "love makes a family" kind of guy, and brought people in the way others bring in stray cats. His house was always bustling the week of Christmas, full of food, wine, children running everywhere. It was perfect. Christmas 2010 was the last time I saw my grandfather, he died in late January. This giant Brady Bunch family is all I've ever known. Because she was part of my life since I was 3, I have always considered B to be my grandmother, and not just a step-grandmother. But since the loss of my grandfather, my mother and her sisters have shown just how fragile some of these bonds can be. They suddenly have very little patience for their stepmother. Although we'll all be getting together this Christmas, it's uncertain if the tradition will live on. The people of my parent's generation seem to be leaning towards holidays with immediate family only. Fortunately, there is some glimmer of hope in my generation. This is the family we've always known, and we're not going to let it go easily.

Three French Hens
Elizabeth has been a student for nearly all of our time together. We met in college. She took a year off after graduation, and then started work on her PhD. This means that money has always been tight, but we've tried to do one vacation together a year. The vacations have come to a temporary halt though, as we spent all of our free funds on fertility treatment, and then a house. I miss being able to get away, but of course I would not trade what I have now for anything. I'm really looking forward to taking them places someday soon. Although I've never really liked theme parks, I can't wait for the day we can surprise them with a trip to Disney. Yeah, I've totally bought into those commercials.

Four calling birds
Oh Christmas cards! We are late late late getting our cards out this year. First, we thought it would be fun to take pictures picking out the tree. The kids thought it would be more fun to run around all of the trees. We got a lot of pictures of the back of heads. Then, we thought we'd try Santa at the mall. We actually got to the mall too early, and Santa wasn't there yet. There were no signs indicating when he'd be in, and the kids were starting to lose their patience so we left. As a last resort, we pulled two candy canes off the tree and plopped the kids down on the stairs and let them try candy for the first time. Here's one of the shots that made the cut. 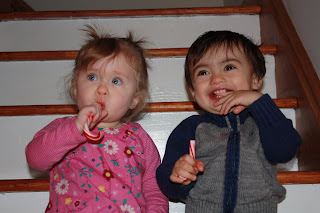 Five golden rings
The kids have shown very little interest in stuffed animals. They have no favorite blankies or anything like that. Earlier this month, we went to a TJ Maxx to find some things to make our new house look a bit more festive. Bean pulled a stuffed (moose? reindeer?) off the shelf, and has suddenly become quite attached to it. Unfortunately, right next to "Made in China" the tag on his butt says "decoration only, THIS IS NOT A TOY" Not sure how to handle this one.
Posted by Gayby Rabies at 2:04 PM 5 comments:

A Partridge in a Pear Tree

Where would I be without An Offering of Love? I certainly wouldn't have any crafty projects do do, or blog post topics! I've decided to jump on the 12 days of Christmas theme, which you can read about here. The first topic is Christmas / Solstice trees.
When we finally bought our first home in late August, one of the things I looked forward to most was putting up a Christmas tree. The tree was one of my favorite things about the holiday season when I was growing up. My brother and I would take turns sleeping on the couch in the living room just so we could be near the tree, with it's twinkling lights getting juuuust warm enough to make the room smell extra piney. The John Denver and the Muppets Christmas tape played very softly in the background. It felt magic.

Our ornaments were an eclectic assortment of things collected over the years. Many were given to us as gifts. Others were picked up as souvenirs on vacation. Some are storebought, others handmade. They all bring back memories. There's the little green alien in a flying saucer given to me by my BFF in high school back when we thought the X-Files was the greatest show on television. There are lots of cats, given to me after my brother got me a pet cat in high school, and everyone assumed I was a die-hard cat person. There is the lavender paper Christmas ball, a gift from my mother's hairdresser friend the year I came out. "Did you notice the color?" he asked with a smile and a wink. There is the glittery wreath that I worked so hard on in elementary school in an effort to impress the teacher I so admired.
Our first tree in our new home is decorated from about the waist up. It is surrounded by a superyard. Rather than presents, the area under our tree is frequently filled with blocks, shoes, remote controls, mail, and anything else the kiddos throw over the gate. The nice warm bulbs of my childhood have been replaced by the more responsible LED lights, which sadly don't emit enough heat to activate my spinning ornaments, the only item I inherited from my grandmother. There is still the mishmosh of ornaments, some from my love's childhood and some from my own. She was raised Catholic, so there are some angels represented in her collection. I didn't have a religious upbringing, so my ornaments include a large number of animals and snowmen. And then there are ornaments from the yearly vacations we took together. There are the ornaments we bought at a Christmas store the year we gave up our vacation to pay for fertility treatment after fertility treatment. There are baby's first Christmas ornaments. The ornaments are a record of who were, who we are, our lives together, and who loves us. And each night after dinner has been eaten, kids bathed and put to bed, and dishes washed, we put back the shoes, and the remote, and anything else that has been thrown under the tree. With nothing but the glow of Christmas lights illuminating the room, my love and I sink into the couch and get to relax and have adult conversation for the first time all day. We are able to enjoy the quiet, in our beautiful home, while our amazing children sleep upstairs. And it feels magic.
Posted by Gayby Rabies at 10:32 PM 2 comments:

It's hard to believe, 2 years ago today I was riding home with my feet on the dashboard (don't worry, I wasn't the one driving) after my IVF transfer. I was hopeful, but very guardedly so. Of the 26 eggs retrieved earlier that week, only 2 made it to transfer. It was my second attempt at IVF, after multiple failed IUIs and home insems. I remember trying to get myself to a place where I was okay with switching to my partner's eggs or body to help start our family. I remember thinking that I should start looking into adoption. I remember looking at the billboards for other fertility clinics along the highway, thinking that maybe one of them might offer a different protocol that could work for me.
Some days I just shake my head in disbelief that I ended up with not one, but two amazing children. I'm also surprised sometimes by how deeply my time as an infertile has impacted me. I find that I STILL make note of billboards for new fertility clinics. I still check the tp every time, and I've even caught myself breathing a sigh of relief when I don't see red. I wonder how long it's going to take before I get it through my thick skull that the IVF worked, and I can let go of the infertile mentality.
Posted by Gayby Rabies at 10:21 PM 1 comment:

Umm, does anyone know how to delete comments made on Wordpress? For some reason, Wordpress keeps connecting to my facebook account and posting comments with my real name. Although I'm cool with most of the blogging community knowing who I am, I don't want to have my real name out there for anyone to stumble on. Help, I'm a total technology moron!
Posted by Gayby Rabies at 11:16 AM 4 comments: