I just sold my kids for a vacuum

I just sold my kids to buy a vacuum and pay some credit card bills.  Not my actual kids, mind you.  But my potential future kids.  I sold the 3 remaining vials of my retired, sold out donor that I had been clinging to since I got pregnant.  In the last few days that those vials were eligible for the 1/2 price buyback, I finally signed and sent the forms stating that I no longer wanted to hold them in storage.

I always thought that I'd want to be pregnant more than once.  Seeing how sweet and loving my 2 1/2 year olds are with the babies in their life makes me long to give them a baby brother or sister of their own.  Every time I see a belly shot, or a grainy ultrasound picture on facebook, I want to have those moments for myself a second time.  But in reality, I know it's most likely not in the cards for us. What makes it hardest for me is that it's mostly a matter of finances.  We are able to cover all of our basic needs, but not much more than that.  Selling the sperm back now feels like admitting that our finances aren't going to get much better in the foreseeable future.  Or at least not in my fertile future.  Our need for the buyback money was stronger than our need to feel 100% sure about our "family goal being reached" as the buyback form puts it.  I'm feeling mostly okay with stopping at two kids, but it's a hasty decision, and feels rather unceremonious to be doing it now, just so that we can make the buyback window.  So if there is anyone out there who still reads this thing I'm wondering-  how did you know when you'd met your family goal?  Did your idea of how many kids you wanted change over time?

P.S.-  Check out the little column to the right.  You'll see that I posted quite a bit when I was trying to get pregnant, a respectable amount when I finally did get pregnant, and then hardly at all once I had kids.  This is only my second post of 2013!  I still read your blogs religiously but don't comment as much as I'd like. I am still trying to decide if I want to keep this one going...
Posted by Gayby Rabies at 7:56 PM 9 comments:

There are times when the word "unfair" just doesn't cut it.  It feels like we should be able to wake up and find out that this was all a bad dream.  Or that we should be able to protest and have the outcome overturned.  There are just no words to express how my heart is breaking over the injustice the universe has thrown at such a beautiful family.  I feel so lucky to have been able to "know" Caemon and his moms through reading their blog over the years.  The anecdotes about a boy who was sensitive, wise and witty beyond his years never failed to brighten my day.  I can not look at a red stand mixer without thinking about him and smiling.  If I were the type of person who was good with words, I would write something eloquent and poignant here about seizing the moment, or hugging your kids.  I am not good with words, but it seems wrong not to pay some sort of tribute.  So I placed (and have refilled several times) a big bowl of chocolates with a crocodile sign at the front desk of the library where I work. I hope it can bring a little sweetness to the days of the people who pass through here, just as Caemon brought sweetness to all who knew him. 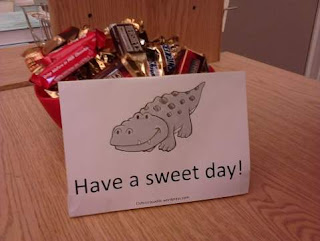 Like many of you, I have been feeling very low listening to the news lately.  I don't think my gift from this year's craft exchange could have come at a better time.  It is heartwarming to know that someone could take time out of their busy lives to make something so nice for a complete stranger.

I got this in the mail on Saturday from the family at http://ihavetwomommies.com/ 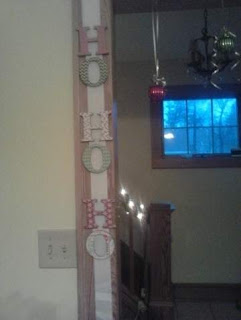 My crummy cell phone picture does not do this craft justice.  It looks professionally made.  If I had seen this in a store, I totally would have bought it.  The colors are great in my home, and the red is a perfect match for my couch.  The kids love it too-  they are really into letters, so they constantly want to be held up to get a better look.  Best of all, now I have a new blog to follow!
Posted by Gayby Rabies at 12:29 PM 1 comment:

to my craft exchange recipient...

The kind folks at UPS just let me know that my package for the craft exchange was delivered.  Fingers crossed it is in one piece.  Once again, I am feeling like my craft looks like crap compared to the other crafts I've seen so far, so I tried to round out the package with some baking.  And once again, I forgot to get a card for my recipient. So I scrawled out a note to stick in the package as the UPS guy who does the deliveries where I work waited impatiently at  for me to tape the damn thing up already.  My apologies to my secret gift recipient.  I also swore that I'd post more this month, so that whoever drew my name wouldn't feel like they were making a craft for the biggest slacker in blogland, but that didn't go so well either.  Maybe next year.
Posted by Gayby Rabies at 5:04 PM 2 comments:

A few months ago, we attended a county fair with a family we met through our mothers of multiples group.  This family also has boy / girl twins, and they're exactly one month younger than our kids.  We socialize with them about once every 2-3 months, and the kids have a great time together.  On this particular day, when it came time to say goodbye, their little girl gave both our kids a little hug and kiss.  Their little boy tried to do the same, approaching our son first.  His mother immediately yanked him back.  "Caden!*  You're a boy, you high-five!" she shrieked.  Her not-yet-two-year-old just stood there looking bewildered.  And my heart broke just a little bit.
My son is, without a doubt the most affectionate human being I have ever encountered.  He asks to be picked up because he just wants to plant kiss after kiss on your cheek.  He loves to hug his sister.  He even hugs and kisses his dogs.  When we brought the kids to Sesame Place, we had to pry him away from Oscar because he had nuzzled so deeply into the crook of the cranky muppet's neck.  I know he won't be like this forever, and I can't imagine trying to squash it out of him.  It makes me so sad to know that Caden has that sweetness in him too, yet his parents are training him to be like his father and have the emotional range of a paper clip.

Today, I went to a Thanksgiving potluck at my kids daycare.  There were two other moms there who know each other socially.  They were encouraging their sons to fight each other on the playroom floor.  They caught the moment on their cell phone cameras as they shouted things like "pin him, tackle him, get him in a headlock".  The more aggressive the boys became, the more the mothers cheered them on.  My own son sat in my lap and watched, and showed no interest in joining in.  As soon as the other moms left the room, the two boys actually ran around holding hands.  I wonder what the mothers would  have to say to that.

I am sure that many people out there think I am doing my son a disservice.  That I am not preparing him for the real world.  That he'll be in for a big shock when he gets older and realizes that hugging his friends isn't allowed.  That he won't be rough and tumble aggressive enough to be friends with the other boys.  Maybe they're right.  I'm not trying to say that one way of raising a boy is better than the other. Still, it makes me sad to see boys being pushed to behave a certain way.

*This name, like all names of this blog, has been changed in order to protect anonymity
Posted by Gayby Rabies at 3:39 PM 9 comments:

The weather is supposed to be nice this Saturday, so we're thinking of going to Sesame Place.  If anyone wants to connect there, just send me an email or post a comment!


I got an email from my friendly neighborhood cryobank the other day letting me know that my storage contract was set to expire on *insert date one week prior to the date the email was sent*.  Thanks for the warning cryobank!  We're still unsure about # 3 so naturally I panicked, and immediately signed up for another year of sperm storage hoping that it would be enough time to make a decision.
Before we had kids, my partner and I had such a clear plan of how things would work.  I'd have our first baby, and then roughly 2 years later she'd get pregnant with our second.   But then we had twins.  And we've had to re-think things.  Did we want two kids, or two pregnancies?  We both have younger brothers, so the idea of an older sibling / younger sibling dynamic has always had appeal.  And there is something so exciting about pregnancy, and meeting a new baby for the first time.  It makes me sad to think that I might not get to experience that again.  I love being a parent to twins, but sometimes it's hard to know that my baby days might be done, that I got it all over in one shot.

I am not ready to call it quits yet, but we have no immediate plans for a third.  For starters, we don't even know who'd carry our third child.  As time goes by, Elizabeth has less and less interest in being pregnant and says that she'd be more likely to have me get pregnant again.  I'm okay with that since I had a really easy pregnancy and delivery, but I worry that she'd change her mind a few years down the line and we'd end up going for #4.  And then there are the logistics of it all.  How the hell would I go for morning monitoring (my clinic does monitoring from 6-8am) with 2 kids in tow?  It will definitely be different the second time around.  If there is a second time.

And just as the panic of making a decision wore off, I looked at my credit card statement.  The cryobank had charged me TWICE for the storage.  When I was finally able to get ahold of someone about the charge, they confirmed that the second charge was accidental.  When they discovered that they had charged my card twice, they credited my account with them.  They didn't put the money back on my credit card, they just gave me a $450 credit to spend with them.  Money that I'm not sure I would ever want to spend.

Yes, I eventually got the charge thing straightened out, but if you use a certain sperm bank-C.a.l.i.f.o.r.n.i.a C.r.y.o.b.a.n.k, make sure you pay close attention to the charges!
Posted by Gayby Rabies at 8:41 AM 7 comments: